What an episode! Exciting and lots of twists and turns, plus Zsasz's introduction was nothing if not chilling. We had a lot of information headed our way, from more background on Ryan, to what Safiyah's role in Kate's disappearance potentially was. One thing is for sure, Safiyah knows how to use her words. Although we won't have a new episode this coming Sunday, we do have the trailer, and wow! Things are bound to get more complex. Check it out below:

What do you think of the new season thus far? Let us know your thoughts below and in our forum! Don't forget to follow us on Twitter for breaking news!

The Batfamily is about to gain a new member during the upcoming third season of Titans, which will premiere exclusively on HBO Max. Jay Lycurgo has been officially cast in the recurring role of Tim Drake, who’s better known as the third Robin in the comics. Lycurgo’s previous credits include roles in I May Destroy You, Father of the Bride, and will later appear in The Batman as an unnamed thug.

In regards to the character’s general description, Tim Drake is described as:

A streetwise kid who’s managed to grow up on the toughest streets without losing his indelible belief in heroism. His easy-going demeanor is backed up by a near-genius mind, a natural detective with a perception of detail far beyond his years.

Are you excited for Tim Drake’s live-action debut? What kind of stories do you think he’ll bring to the table? Titans is certainly getting more and more packed by the day, so let us know below your thoughts on the ever expanding roster of characters below and in our forum! Don't forget to follow us on Twitter for breaking news!

We're excited to have Black Lightning returning to our screen next week, and while we wait, we've already gotten the second episode's synopsis. It's giving us a better idea of what we can expect next week, and how it'll be playing out throughout the season. From the looks of it, Freeland will still have some problems with the gangs, while the Pierce family has issues of their own. Although the synopsis doesn't divulge much, it's definitely intriguing. Check it out below:

WAR – The war between the 100 and the Kobra Cartel rages on. Meanwhile, Lynn (Christine Adams) continues to be concerned about Jefferson (Cress Williams).  Lastly, Jennifer’s (China Anne McClain) curiosity is piqued by a new boy at school. Nafessa Williams, James Remar, Jordan Calloway and Chantel Chuy also star. The episode was written by Charles D. Holland and directed by Billie Woodruff (#402). Original airdate 2/15/2021.

Are you excited for the new season? Let us know your thoughts below and in our forum! Don't forget to follow us on Twitter for breaking news!

While we won't be getting a new episode on the 7th, we do have the synopsis for the 4th episode, coming for Valentine's Day. Notably, we'll see Batwoman taking to Gotham, with Ryan trying to use her newfound persona to make lives better for others, but at the risk of dredging up some bad memories. Meanwhile, things seem to be getting more and more complicated for those who are missing Kate, as they will apparently receive some sort of hope that she's alive, but it will force some lines to be drawn, and apparently, some surprising partnerships and betrayals. Check out the full synopsis below:

NOT EASILY FORGOTTEN – As Batwoman (Javicia Leslie) attempts to fight the proliferation of Snake Bite through Gotham, a random encounter forces her to revisit her painful past.  Empowered by her new role, Ryan Wilder is determined to ensure others like her don’t go unnoticed.  Meanwhile, those closest to Kate are given a good reason to believe she is still alive, forcing unexpected alliances and betrayals.  Also starring Dougray Scott, Rachel Skarsten, Meagan Tandy, Nicole Kang and Camrus Johnson.  Menhaj Huda directed the episode written by Ebony Gilbert (#204).  Original airdate 2/14/2021.

Who do you think could be part of those unexpected alliances and betrayals? Let us know your thoughts below and in our forum! Don't forget to follow us on Twitter for breaking news!

First Cast For The Sandman Announced

It begins! Today, Netflix has revealed the initial cast for their upcoming adaptation of The Sandman. Based on the comic book series by Neil Gaiman, it tells the story of Morpheus, the Dream King, and now we have the first seven cast members announced. Without further ado, check them out below:

Tom Sturridge is Dream, Lord of the Dreaming
Gwendoline Christie is Lucifer, Ruler of Hell
Vivienne Acheampong is Lucienne, chief librarian and trusted guardian of Dream’s realm
Boyd Holbrook is The Corinthian, an escaped nightmare who wishes to taste all that the world has in store
Charles Dance is Roderick Burgess, Charlatan, blackmailer and magician
Asim Chaudhry is Abel and Sanjeev Bhaskar is Cain, the first victim and the first predator, residents and loyal subjects of the Dream Realm.

Talk about a stellar cast! We’re definitely very excited. Netflix has also given us some headshots of the cast thus far: 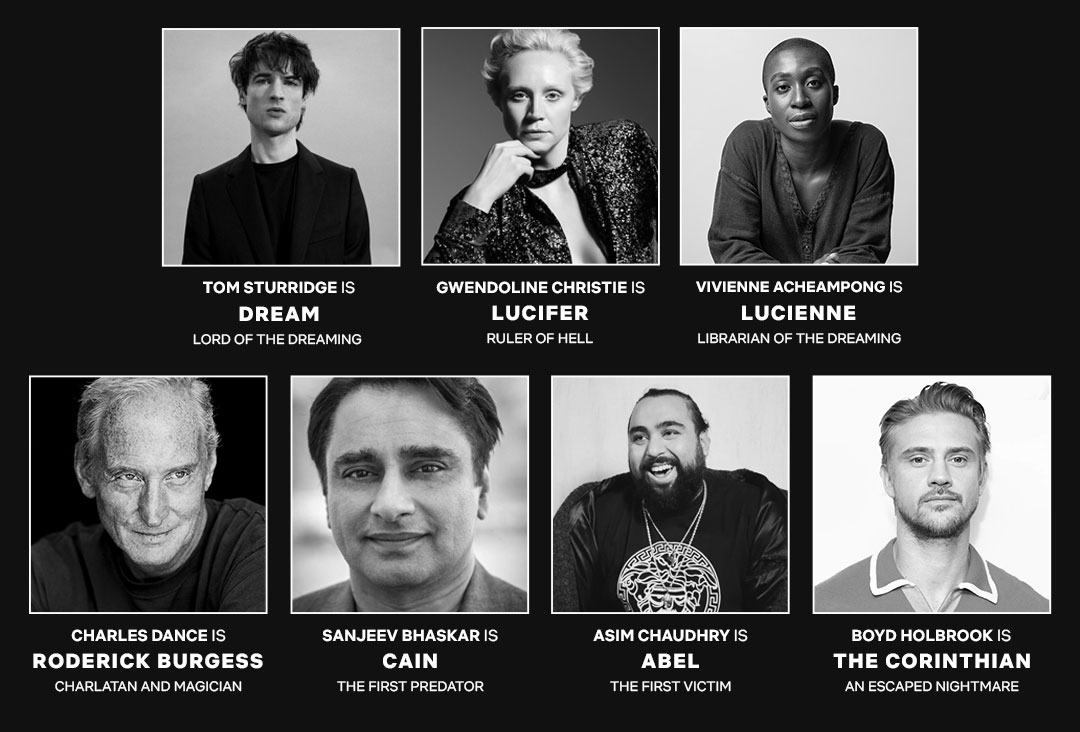 For those who want a refresher, here’s the official logline of the show:

A rich blend of modern myth and dark fantasy in which contemporary fiction, historical drama and legend are seamlessly interwoven, The Sandman follows the people and places affected by Morpheus, the Dream King, as he mends the cosmic — and human — mistakes he's made during his vast existence.

We also have a quote from Neil Gaiman:

For the last thirty-three years, the Sandman characters have breathed and walked around and talked in my head. I'm unbelievably happy that now, finally, they get to step out of my head and into reality. I can't wait until the people out there get to see what we've been seeing as Dream and the rest of them take flesh, and the flesh belongs to some of the finest actors out there.

With both shows set for next month, we have now gotten two new posters to share, for both Black Lightning, as well as Superman & Lois. As you can see below, both shows are giving us a glimpse of the main messages of the season.

Black Lightning has a simple and powerful tagline: "Power Up". The final season, set to premiere on February 8th, will be dealing with the fallout of everything that happened last season surrounding the Pierce family and Markovia, as well as changes that are bound to happen. Ultimately, it's about finding the strength to deal with those events, and do what's right.

On the other hand, Superman & Lois has "Saving the World Starts At Home", a clear indication that the show will focus on Clark and Lois' two sons, which we also saw referenced in the trailer last week. The show will be premiering for the first time on February 23rd with a 2-hour special including the pilot episode, as well as a celebration of Superman right after. 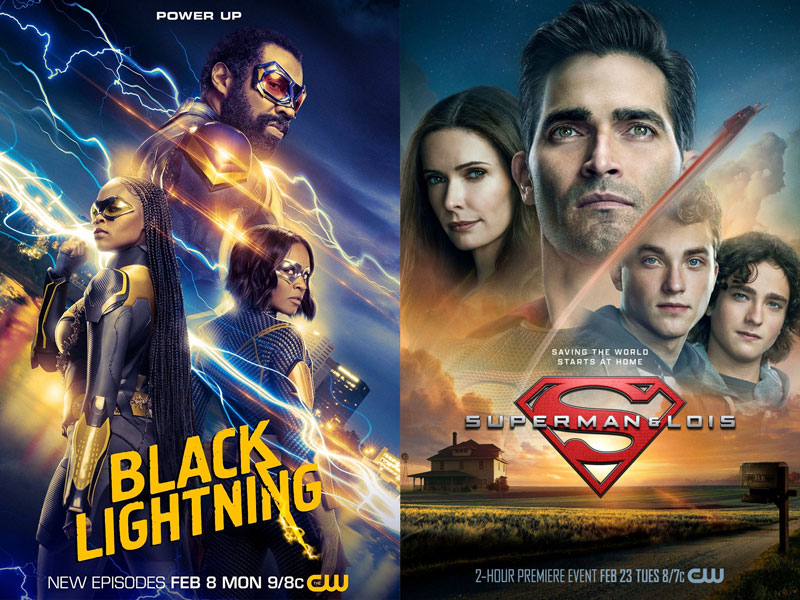 Are you looking forward to both shows? Let us know your thoughts below and in our forum! Don't forget to follow us on Twitter for breaking news!

We are less than 2 weeks away from having Black Lightning's family on our screens again, dealing with the fallout of everything that happened after the fight against the Markovians. We have nine new images which give us a glimpse into what we can expect, and the changes that are coming. Crime is still a thing in Freeland, judging by Lala and Tobias being around, so the Pierce's new secret headquarters has gotten an upgrade. Check out the full gallery:

Below, you can find the synopsis for the episode, which gives some hints as to what those changes are with the Pierce family:

What do you think is Gambi's interesting opportunity? Let us know your thoughts below and in our forum! Don't forget to follow us on Twitter for breaking news!