The wild animated show chronicling Harley Quinn's exit from behind Joker's shadow into her own character has been renewed for another season. The show, which is currently airing its third season, will be returning for a new season soon. It's likely that, like during the first two seasons, where they split the first full season into two smaller chunks, meaning we shouldn't have to wait long for the new adventures. There will be some changes behind the scenes according to the EPs. Justin Halpern and Patrick Schumacker, the Executive Producers released a statement on the renewal, saying:

We are ecstatic that HBO Max wants the story of Harley and Ivy to continue. And we are equally thrilled that this next season will be in great hands with Sarah Peters as our showrunner and Ceci Aranovich overseeing animation production, as they have both greatly influenced the show with their brilliance since the beginning.

Sarah Peters has been part of the production since season 1, so we're sure we'll be seeing more of what makes this show great. Let us know your thoughts below and in our forum! Don't forget to follow us on Twitter for breaking news!

After yesterday's synopsis, we were not expecting to see 3 new synopses to be released! Check them all out below:

The Evidence seems to be hinting that Sylvester has a plan that doesn't go quite as expected, and it might have bigger consequences. We're also going to be getting a new suspect, and Courtney will be talking to Cameron. The tagline of going back to the scene of the crime does raise the question as to whether there was something they might have missed in their investigation that Beth will uncover, leading to the new suspect.

The fifth episode, The Thief, will be seeing Courtney and Cameron together, though at the expense of Courtney's leadership role within the JSA. Meanwhile, the boys will be talking to Cindy, which does leave us wondering how that might go, and what they could want with her. Lastly, Yolanda will be following her gut and finding something shocking out - once again, the tagline might mean that she might find out that someone is lying and keeping a secret.

To round it off, the sixth episode is titled The Betrayal. Knowing the previous episode, it could be the fallout of whatever Yolanda discovers. From the synopsis, it seems like Courtney and Cameron's secret gets unearthed, at least by Pat and Barbara. Could it also be that the JSA finds out and it drives a wedge between them? One line about Sylvester trying to step in for Courtney seems to indicate it, but the rest of the JSA doesn't seem to mesh with the legacy JSA member quite well.

With all of these synopses, what do you think about how the season is shaping up? Let us know your thoughts below and in our forum! Don't forget to follow us on Twitter for breaking news!

We're nearly there, the premiere of Stargirl's third season is in one week! Meanwhile, let's take a look at the third episode's synopsis. There's a mysterious tip that might help the JSA find out more about their investigation, Sylvester will be doing some introspection and searching for his new identity without Starman, and of course, the ep title itself is curious: blackmail. Who will be blackmailing who? And to what end? There are a lot of quesitons building, and we're sure that once the new season kicks off, we'll have some answers and plenty more questions. Check out the synopsis:

FINDING BALANCE — Courtney (Brec Bassinger) and the JSA receive an anonymous tip that could help in their murder investigation. Meanwhile, after being told to find balance, Sylvester (Joel McHale) looks into potential jobs in Blue Valley, while also trying to figure out who he is without his Starman identity. Walter Carlos Garcia directed the episode written by Taylor Streitz (#303). Original airdate 9/14/2022.

We're less than two weeks away from Stargirl's return, and we're looking towards the second episode's synopsis! We're diving deep into the murder mystery it seems, with the JSA starting to search for suspects when a suspicious murder occurs. Also of note is that The Shade will be making an appearance, and that Sylvester's return might bring a fair share of trouble. There will be plenty more happening, including Barbara trying to help Paula fit in, something which will be harder than it looks. Check out the synopsis below:

Are you curious about the murder mystery? Let us know your thoughts below and in our forum! Don't forget to follow us on Twitter for breaking news!

Say it isn’t so! Recasting isn’t an uncommon occurrence on television, but whether for reasons good or bad, it stings all the same. The latest recast announcement came this evening via Deadline, where they announced that Jordan Elsass would not be returning to his role of Jonathan Kent on the CW’s Superman and Lois.

Not much is known about the reason Elsass departed from the show, other than personal reasons. The series producer Warner Bros. TV released a short statement about Elsass’ departure, stating that “Jordan Elsass has notified the Studio that he will not be returning to Superman & Lois for season three due to personal reasons. The role of Jonathan Kent will be recast.” Elsass has not commented on the matter, and no other information about Elsass or the recast is known at this time.

While the news is absolutely disappointing, we wish Elsass nothing but the best and hope that the actor replacing him will live up to the wonderfully high bar he has set for Jonathan Kent. Let us know your thoughts below and in our forum! Don't forget to follow us on Twitter for breaking news!

Stargirl "The Murder" and "The Suspects" Galleries

After getting our first synopsis last week, we're following up with the galleries for the first two episodes of Season 3! We're dealing with frenemies this season, and the subtitles for each episode, The Murder and The Suspects, seem to give the idea that we're going for a murder-mystery of sorts for this season. There are certainly plenty of dodgy characters around Blue Valley who could be capable of murder, but the bigger question is: who was murdered? Check out the galleries below which shows the return of our fave characters, and get ready for more to come!

The CW has not only released a new poster for DC's Stargirl, but we also have a synopsis for the third season premiere coming very soon! 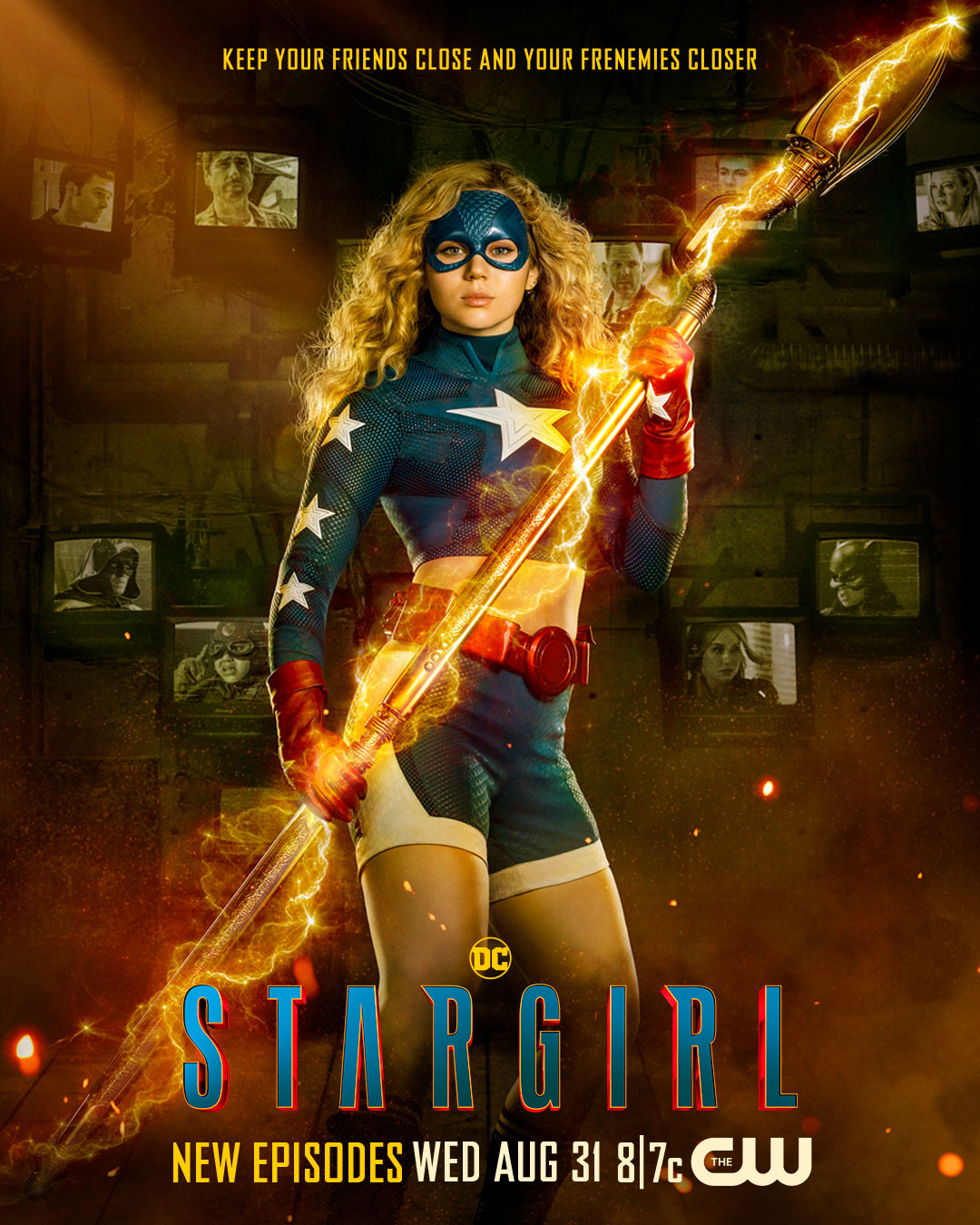 The poster highlights our titular superheroine and her various friends and foes. The tagline “keep your friends close and your enemies closer” also teases a very personal storyline for the JSA. As for the synopsis for the season three premiere, titled “The Murder”, it sounds like the opening episode will certainly pack a punch with the return of both Starman and the Gambler! Check out the poster and the episode synopsis below!

STARMAN IS BACK — With Starman (Joel McHale) back from the dead and her former super-villain enemies vowing to reform, Courtney (Brec Bassinger) is hopeful that there will finally be peace in Blue Valley. But when The Gambler (guest star Eric Goins) arrives to town looking to make his own amends, the team find themselves at odds over whether he can be trusted. Luke Wilson, Amy Smart, Yvette Monreal, Anjelika Washington, Cameron Gellman, Trae Romano, Meg DeLacy, Neil Hopkins, Joy Osmanski and Alkoya Brunson also star. Andi Armaganian directed the episode written by Geoff Johns (#301). Original airdate 8/31/2022.